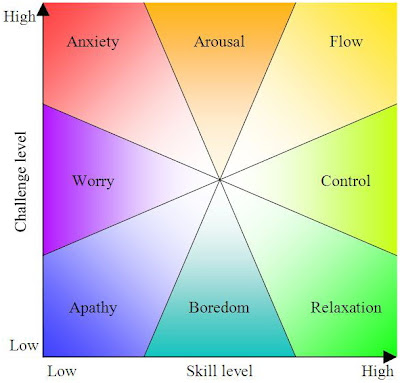 Apathy (also called impassivity or perfunctoriness) is a state of indifference, or the suppression of emotions such as concern, excitement, motivation and passion. An apathetic individual has an absence of interest or concern to emotional, social, or physical life. They may also exhibit an insensibility or sluggishness.
Boredom is an emotional state experienced during periods lacking activity or when individuals are uninterested in the opportunities surrounding them.
Relaxation occurs during an activity that helps a person to relax
Worry is an emotion in which a person feels anxious or concerned about a real or imagined issue, ranging from personal issues such as health or finances to broader issues such as environmental pollution and social or technological change.
Control : Overlearning is a pedagogical concept according to which newly acquired skills should be practiced well beyond the point of initial mastery, leading to automaticity. Once one has overlearned a task, one’s skill level is higher than the challenge level for that task.
Anxiety is considered to be a normal reaction to stress. It may help a person to deal with a difficult situation, for example at work or at school, by prompting one to cope with it. When anxiety becomes excessive, it may fall under the classification of an anxiety disorder.
Arousal is important in regulating consciousness, attention, and information processing. It is crucial for motivating certain behaviours, such as mobility, the pursuit of nutrition, the fight-or-flight response and sexual activity.
Flow is the mental state of operation in which the person is fully immersed in what he or she is doing by a feeling of energized focus, full involvement, and success in the process of the activity.
(excerpts from wikipedia)

Csíkszentmihályi identifies the following nine factors as accompanying an experience of flow:

Flow is also something you want to experience to get your working day go by faster.
(Not from wikipedia)

« Everybody can get rich, so they say.
The manga industry. A proven benchmark for customer satisfaction. »