That’s what I came up with, based on the observation of French companies.

You must have heard about the Madoff scheme, also called pyramidal scheme or PONZI scheme.
It’s been known for a long time, and the basic principle is:
The last people entering the scheme pay for the others. And the system works only if more and more people keep coming.

One common example is the typical mail telling you to send 5 euros to the sender and forward the same mail to 4 people. If the 4 people send you 5 euros each, you make 15 euros in the end. So as long as people join the system, the first entrants profit from it. And they can always say “We just ask you to do what we already did.”

The similarity is striking:
Audit and consulting firms use a pyramidal PONZI scheme, so that partners profit from latest entrants.
This works very well for the very big consulting or auditing company. I will focus more on auditing companies.

Here is the global career path in one of those big companies as explained by their HR. 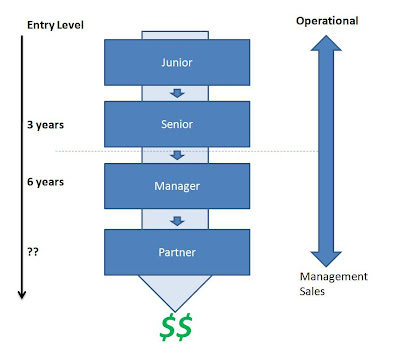 Nothing wrong with that. A typical career path and you have something to aim for.

But let’s take a closer look. 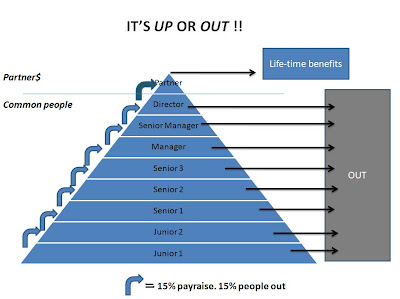 There are few partners for an army of juniors and interns. And I don’t even want to talk about the salary.
As well, the hours are very tough at the beginning, as “It’s UP or OUT!!”. You have to prove your worth to access the next step of the pyramid. And the longer you have stayed in the system, the more you have to work as competition increases and the amount of time already invested.

Not to mention that because of the long hours, you have spent more and more time with your co-workers and lost contact with external acquaintances… in the end you become more and more productive for the company. And nobody else would hire you for such a competitive salary. You’re stuck there.

So what is it like to be an auditor? 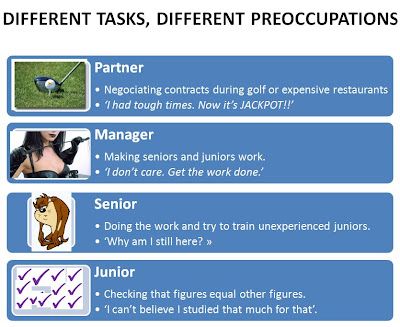 Finally, we can all agree that those firms have created a pyramidal system that only profits to the first entrants, and that can only work if people keep coming.

It is therefore a PONZI scheme.

I rest my case.

Disclaimer// no company of my knowledge is targeted her…

2 Comments to "Audit and consulting firms use a PONZI scheme."

« It’s 26 year, 8 months. Do you know where your life is?
How to organize your streaming schedule. »