Back when I was 10, I wrote an essay about “La bande à Picsou.”
I think that was one of my first essays on a topic that really inpired me.
My mom thought it was good.

Yes. I spent a lot of time reading “Picsou magazine”, though I despised the “Mickey parade” or other disney stuff.
Scrooge McDuck/Picsou taught me about economics, trading, supply and demand… and I’ve grown attached to that character.
I remember, as a child, spending a birthday party reading “Picsou Magazine” while the others were busy having fun downstairs.

I don’t know in which extent Scrooge McDuck has influenced my life, but there are a few facts that I’d like to highlight about that fascinating Duck. The richest Duck in the world.

A business role model.
Born in Glasgow, Scrooge earns his first dime scraping shoes. It is an american dime, which teaches him to trust nobody in the future. 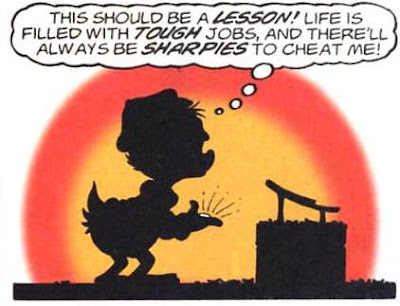 Travelling throughout the world, he meets nothing but business failures for 20 years of hardship.
Most common reason? Timing. 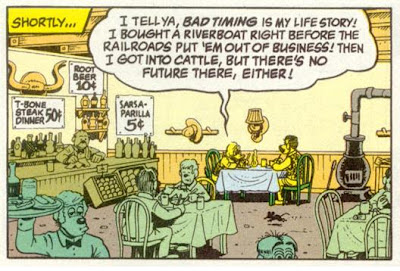 And even when he gets ahead of the flow, and gets a copper mine before the Copper rush because of the spreading of electricity use, he has to leave it and go back to his family in Glasgow.

One day, hard work pays.
In the Klondike, he finds a gold mine, that makes him is first million. 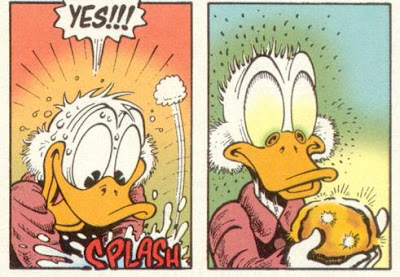 From there, he travels the world and sets up businesses that make him become the richest duck in the world… three years later, the business savvy duck becomes a billionaire.
He amasses a great amount of money and memories that he shares with his nephews.

The Scrooge McDuck experience.
His scottish background gives him the eyes on details where money can be saved or made. It is in fact a great subject of pride in the McDuck clan, and his creativity and persistence creates renewed opportunities. 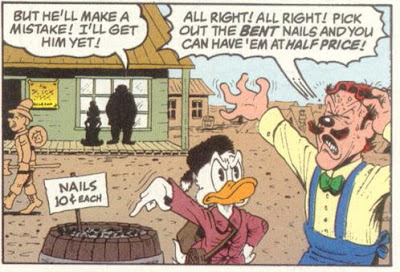 Energy, stamina, will-driven behaviour, makes him able to withstand the harshest conditions. Some parts of his life involve legendary battles, where the mighty duck defeats an army single handedly while protecting his belonging.

He is a fast learner, and learnt skills in every places he went to. From bison riding, boomerang throwing and fluent finnish, Scrooge MacDuck learns everything he finds useful and becomes the best at it. 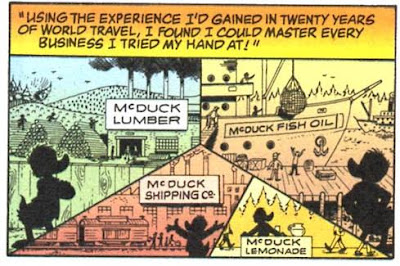 The McDuck sacrifices.
In his soul-eating quest for money, Scrooge creates a life full of memories and events. He even meets some known figures like Wyatt Earp, Jesse James and Teddy Roosevelt – the latest becomes a good friend.

But his ways, alienated him his family. His sisters left him with his money. 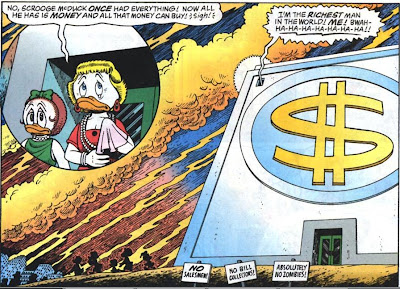 Donald, his nephew, would only come back a many years after.

As well, Scrooge found the love of his life. Goldie.
But life was hard on him, and finally, on a very sad misunderstanding, Scrooge leaves the Yukon leaving Goldie behind, with a love story that never happened.

That part shattered his heart (and mine), as something will be forever unachieved in his life.

Scrooge longs for adventure. Rather than making money on other people, Scrooge values work and hates phonies.
His adventures and his life in wild nature, as a rancher, as a gold digger, gave him the ability to scare wild animals, or get close to them. 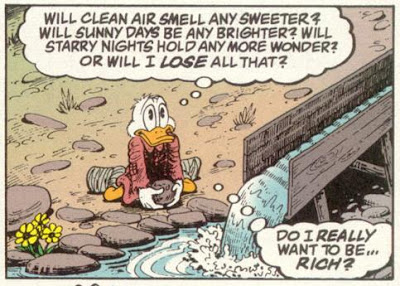 But to him, everything comes from hard work. And that was clearly what he was doing before getting rich… Working hard, alone, in the mine… becoming the best cabin boy on a cattle boat… He always gave his best and nobody can tell what he has missed, but you can tell what he finally got.

My take on this.
Those are just the basic elements of Scrooge’s life. You can read the reference comic “Life and time of Scrooge McDuck” (12 chapters) that built the Scrooge as we know it. here.

I highly recommend the Yukon’s episodes, where Scrooge makes his first million and meets Goldie.

At the last episode, there is a citizen Kane like sequence, showing Scrooge, longing for Goldie.

As a kid, I admired him. He was success itself. He might have indirectly influenced my lifestyle, and I think I get the word “business opportunity” from a Picsou magazine.

It is hard to claim Scrooge as a role model, even if he is a formidable businessman… He makes his relatives work for him for an undecent salary, he spends no useless pennies, and has hundreds of ennemies.

The last chapter made me think.
On your deathbed, what will you have to show for?
1000 cube meter of money? A life of adventures? Memories? Nephews? A missed love?

For me, reading those comics with a new eye brought a new life to this duck.

4 Comments to "The McDuck inpiration. What will you have to show for?"

« How to pretend you are busy at work!
Shorter sleep time = Longer life span »